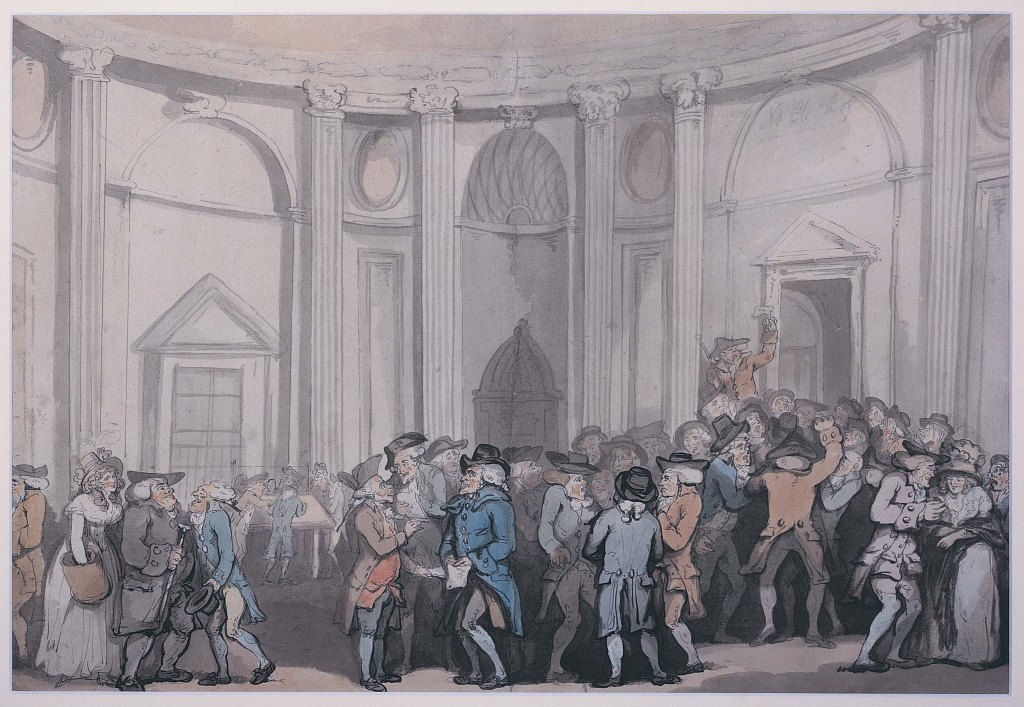 Last May, the Bank organised an economic history workshop at the St Clere Estate, home of former governor Montagu Norman. In this guest post, one of the speakers Anne Murphy from the University of Hertfordshire, looks at what the Bank’s archives can tell historians about how business dealt with rapid organisational change at the start of the industrial revolution…

Industrialisation was not the only driver of change during the eighteenth century. Recent historiography has revealed more about the financial and organisational revolutions that helped to shape the British state and the country’s economic development. The Bank of England was at the forefront of these revolutions and a pioneer of new modes of business organisation. A business that started out in a small rented space with only seventeen clerks in 1694 was, by 1815, employing nearly 1,000 workers and occupying most of the Threadneedle Street block. Yet it has been sadly neglected as a case study. What might we find in the Bank’s archives to understand how business adapted to rapid and radical change during the eighteenth and nineteenth centuries?

Our first insight actually comes from the extent of that archive. One response to changing organisational priorities was to accumulate information. The need to maintain comprehensive and accurate records meant that the Bank kept nearly everything. So vast was the undertaking that by the 1770s it had to invest in a four-storey fire-proof library. And many of the records preserved there have survived. Look further into the archive and it is possible to gain insights into how a new business model evolves, how a workforce adapts and how an institution conveys trust in a rapidly changing environment.

One of the most fascinating things about the eighteenth-century Bank was the scale of the work undertaken. By the mid-eighteenth century it was dealing with hundreds, and sometimes thousands, of transactions a day. In response, the Bank adopted factory-like systems of operation with individuals working in specialised capacities, coordinated both within and between offices. It operated what was effectively shift-work, the first when the Bank was open to customers and a second which began in the late afternoon and extended into late evening to ensure the paper record was updated for the start of the following day.

One of the key requirements of this system was adherence to clock time, something that historians have argued came only with the factories of the industrial north. Yet, the Bank invested in clocks, worked according to strict deadlines and imposed time discipline on both its workers and its customers from the early eighteenth century. And workers absorbed the lessons of time discipline. They responded by using working hours to negotiate better conditions and, in some cases, to pursue grievances against their fellow workers: those whose attendance was not as regular as might have been desired.  During an inspection conducted in 1783, for example, Abraham Vickery, one of the heads of the Consols office, accused the men under him of poor time-keeping. But it also emerged that a number of clerks had poor relations with Vickery, that ‘bad words’ had been exchanged in a number of instances and that there was ‘cause for discontent in the Consols Office against Mr Vickery’. 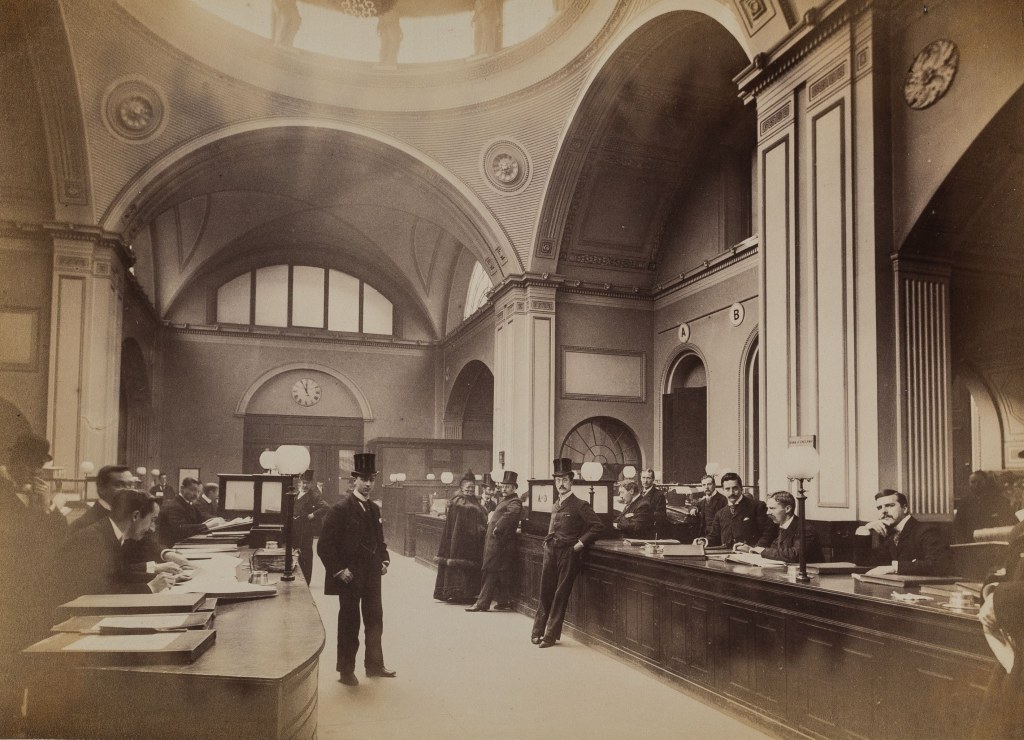 The Consols Office. Source: Bank of England Archive number 15A13/1/7

Time was one of the technologies used to support the Bank’s work but this was not a business heavily dependent on technology. Other forms of problem-solving were, however, important. Often this happened at levels that we might view as mundane, improvements in systems of filing, for example. Sometimes the problems are not obvious to the modern observer. During the 1780s, in order to expedite the processing of bills of exchange, it was decided they should henceforth be filed according to the day on which they fell due rather than by the name of customer. A new filing cabinet was ordered to be built for the purpose. One of the greatest threats faced by the Bank was fire and, in the absence of a fire brigade, much effort went into prevention. In addition to the use of fire-proof buildings, the Bank invested in its own fire engines and indeed in the infrastructure to supply the water they needed.

This tells us something about the adaptiveness of eighteenth-century business but also highlights the costs incurred when the state fails to provide an infrastructure that meets the needs of a developing economy.

An inadequate education system also created costs. Finding men – and, at this time it was only men who the Bank employed – with the right skills was a persistent problem. The preservation of interview records from 1800, and references to testing skills from the 1690s onwards, allows us to explore this issue in detail. The tests applied to applicants were of handwriting, skills in basic maths and the ability to count and handle money. They were also expected to be of upstanding character, free from debt and not Catholic! Few passed the tests with flying colours. The ability to manage money in what was a hugely complex monetary environment was particularly hard to find.

The Bank adapted to the lack of a skilled workforce by operating an internal labour market, recruiting men at entry level only and training them on the job. Because work could be coordinated in the ways described above, workers could also be expected to undertake just one aspect of that work. They learned a set of skills and spent their days doing the same thing over and over again. The Bank also incentivised good behaviour by requiring men to take oaths to act well on their employer’s behalf and it enforced that good behaviour imposing fines on men whose mistakes cost the institution money.

But the Bank neglected one important aspect of creating an effective workforce. It paid poorly at the lower levels. By the mid-eighteenth century a starting salary of £50 per annum was barely enough to support a bachelor, let alone a man with a family. Clerks thus had high incentives to find other means of making money. These extended from taking second jobs, to pilfering candle stubs and used pens to sell in the second-hand market, to the taking of gratuities from customers and the propensity of men working in the stock transfer offices to supplement their incomes by working as jobbers and brokers.

There were strict rules against the clerks acting as jobbers and brokers but an Inspection carried out in 1783 reveals that it was nonetheless widespread. It was facilitated by the fact that the Bank, from the 1760s onwards, housed the major open outcry market in the state’s debt. The Rotunda, depicted by Thomas Rowlandson in the 1790 below, was a noisy, chaotic and sometimes dangerous space. It stood in stark contrast to the rest of the Bank, in which a carefully considered aesthetic had been created as a means of conveying messages of solidity and security to the public who used its services.

The Rotunda depicted in “The Bank” by Thomas Rowlandson, 1790. Source: Bank of England Archive no. 0164

Equally the Bank’s directors were keen to signal their connection to the state. Britannia was particularly prominent throughout, stamped on the Bank’s notes, ledgers and letterheads and as a statue over the entrance to the Pay Hall. With her shield and spear signalling defence of the nation and close associations with trade, industry and profit Britannia offered a clear statement of the Bank’s aims and the conflation of those aims with the goals of the state. But this message was an uncomfortable fit with the Bank’s willingness to house a market that was often criticized for its supposed attempts to undermine the nation’s stability and for taking advantage of the exigencies of war. 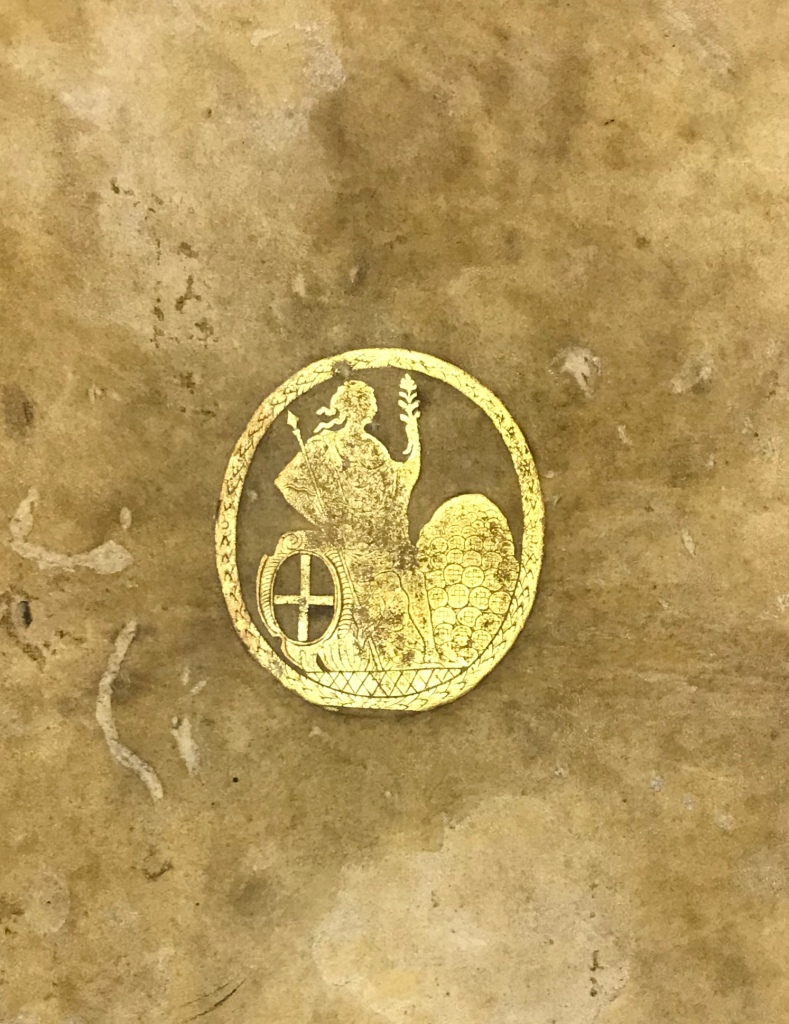 The contradiction was dealt with by the creation of both physical and business separation between the work of managing the public credit and the business of trading the government’s debt. It was not wholly successful, as the transfer clerks’ business sidelines demonstrate. We might ask, therefore, to what extent the Bank could be trusted to serve its two masters: the state, which expected the cost-effective and reliable management of its debt, and the public who lent to the state and expected the Bank to safeguard their investment.

This question is of great importance to historians who seek to understand why the public was willing to lend, throughout the long eighteenth century, to a state so often at war. It has been answered by many scholars with reference to the institutional changes brought about by the Glorious Revolution of 1688.

The role of the Bank in this process was key and the location of the market within its walls did not serve to undermine, but rather to enhance what has been referred to as a ‘credible commitment’ to honour the state’s financial promises. It made the market easy to locate and accessible. It allowed the visitor to the Bank to observe all the processes of providing public credit. Indeed, the Bank was undeniably a space in which public credit was put on display and the financial integrity of the state was demonstrated. From its grand architecture to the open-plan arrangement of the offices to the Rotunda where the brokers and jobbers gathered, visitors were invited to witness public credit at work.

Arguably then, despite all the potential disadvantages of locating the market within the Bank, some wider and more important purposes were realized: those of exposing the functioning of the market in the state’s debt to scrutiny and demonstrating the credibility of public credit. ‘Credible commitment’, therefore, did not just reside in state institutions that might have seemed rather nebulous in the eyes of most public creditors. By the mid-eighteenth century ‘credible commitment’ could be found and observed at the Bank of England. There, credibility lay in the provision of liquidity and a one-stop-shop in which all business relating to the public debt could indeed be done quickly and easily.

Anne Murphy is the Dean of Humanities and a professor at the University of Hertfordshire.