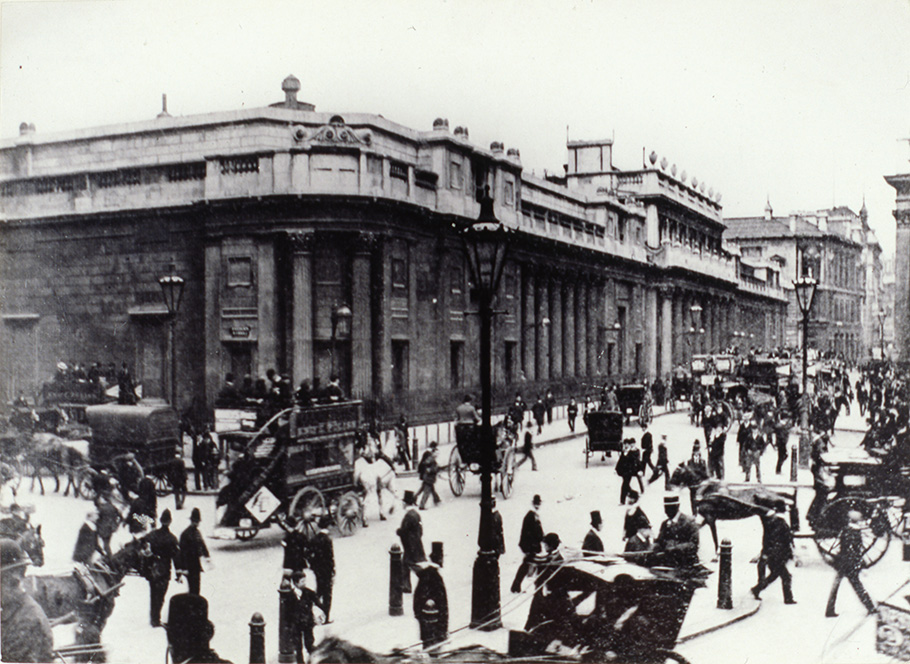 In the first age of financial globalisation, from around 1880 to 1913, many countries tied their currencies to the mast of gold. The Bank of England’s unparalleled influence over this period is depicted by the Lady of the Bank, seated on the globe with a shower of gold coins to one side, which is carved into the Bank’s pediment. There was an old saying in the City that the Bank’s rate could draw gold from the moon. But could it?

Using a previously unexploited record in the Bank’s archives my research suggests that its influence did not even reach US shores: contrary to widespread belief, Bank Rate was not responsible for gold shocks and crises in the US.

The conventional wisdom that there were large policy spillovers hinges on two institutional factors. The classical gold standard and the absence of a US central bank altered the transmission mechanism during the period. The gold standard was a commitment by members to fix the price of their domestic currencies in terms of a specified amount of gold. This meant that monetary shocks were transmitted between countries via gold flows. The US did not have a central bank to curb gold outflows while sterling’s role as a reserve currency meant that the Bank of England’s ability to attract gold to the UK was unparalleled. This led to the widespread belief that when the Bank raised its rate, there was an outflow of gold from the US to the UK, which reduced the US money supply often developing into a financial crisis. I apply new econometric tools in order to challenge this age-old view of the transmission of monetary shocks under the gold standard. In order to estimate the impact of the Bank’s policy on the US economy I first attempt to isolate policy shocks – changes in Bank Rate that were not motivated by US events or did not follow a known rule. Including endogenous rate changes might create the appearance of a relationship where there is none and including anticipated ones might conceal a true relationship.

But this has been difficult because the Bank’s motives for changing its main policy tool, Bank Rate, were not known. Until now. I recently unearthed the Bank’s Record of Outstanding Events in the Bank’s archives, which includes references to political and economic events of both national and international significance, many of which are explicitly identified as causative of rate changes. As a record compiled by the Bank’s Cashier Department, which undertook all banking services and handled the day-to-day operations of the Bank, this is an extremely credible source.

First I turn to endogenous events. The record includes instructions that “entries … should be confined to matters which may have a definite influence on Finance in the broadest acceptance of the term”. For example, just before the outbreak of war in South Africa in October 1899 the Cashier Department recorded “extraordinary circumstances of two advances in Bank Rate in one week … due to threatened war with Transvaal and consequent stoppage of gold supplies”. There are similar entries connecting policy changes in Britain with events in the US. For instance, in August 1893 Bank Rate was hiked 250 basis points due to “commercial panic in New York, withdrawals of gold from the Bank for America and continued large withdrawals of gold for the US where banking and industrial failures were very numerous”. The Record includes thirty six references to the US in the same month as a rate change between January 1884 and December 1913. The fact of their inclusion in the record coupled with their proximity to Bank Rate changes strongly suggests events in the US had an impact on policy. Those events were, therefore, to some extent endogenous to the US economy and should be excluded from an empirical investigation to reduce bias.

The Record of Outstanding Events

Some Bank Rate changes were also anticipated. The Bank followed a known rule of adjusting its rate to manage its reserve to liabilities ratio. As this ratio was published regularly in financial journals, policy changes that were reflex movements to it could have been anticipated and should be disregarded. Using this new monetary policy shock variable I can now try to estimate the size of the spillover effect on the US.

A VAR (vector auto regression) can be used to summarise the behaviour of a system of economic variables. I included eight variables in my VAR; the Bank’s reserve ratio, Bank Rate, UK gold stock, US prices, US output (Miron and Romer’s industrial production index), US gold stock, US stock prices and the US commercial paper rate, from January 1884 until December 1913. Impulse response functions (IRFs) charted below trace out the responses of variables in the system to a one unit shock in Bank Rate. I generated 95% confidence interval bands. If the band did not include zero I considered the response significant.

The statistically significant positive response of UK gold to a surprise increase in Bank Rate implies that contractionary Bank policy was effective in attracting gold to the UK. But did this gold come from the US?

IRFs where impulse is Bank Rate and responses are from top: US gold stock, US industrial production, US stock prices and US commercial paper rate

As the IRFs illustrate, I estimated no statistically significant negative impact on US gold or industrial production and only a very small, transient effect on financial variables. This implies that any spillover to the US was a ripple not a riptide and runs counter to the traditional view that movements in Bank Rate were responsible for large gold shocks and crises in the US.

My results were robust to numerous checks. I experimented with two other proxies for output; Macaulay’s pig-iron production series and the US cotton supply (the agricultural sector was the largest sector of the US economy at the time). I also adapted my method of washing out seasonality and the ordering of variables in the VAR. This supports my conclusion that there was no large spillover via Bank Rate to the US.

Bank Rate may not have transmitted international crises to the US but it may have aggravated crises in that country. To test this I adapted my model to investigate the impact of endogenous (US driven) rate hikes. Again I estimated no significant impact on the US economy.

There are several potential explanations for this counterintuitive result.

First, the growth of the London discount market might have reduced the Bank’s capacity to control the money market. So, for example, commercial banks in London might have undercut the Bank by offering a rate below Bank Rate. But that explanation is significantly undermined by my finding that surprise Bank Rate hikes did in fact have a significant positive effect on the UK gold stock and Bank reserve ratio. Contemporary accounts also noted that a Bankers’ Committee supported the Bank’s efforts to maintain rates, and this, along with a succession of other changes after the Barings crisis, secured the Bank’s influence.

Another possible explanation is that in reality exchange rates were not completely fixed. Transaction costs existed which meant that exchange rates could fluctuate without impacting gold flows. Investors faced a higher cost when moving funds from the US to the UK than from Europe in the form of a brokerage fee, the cost of shipping gold abroad and the risk that the UK rate could fall once gold was in transit. So movements in Bank Rate, which were sufficient to overcome such costs in neighbouring European countries, may have been insufficient to change incentive behaviours related to the US.

Finally, unconventional monetary policy such as discriminating against US bills may have been more important in causing riptides than movements in Bank Rate.

These findings suggest that the Bank should be cast in a much more positive light in future accounts of the classical gold standard era. They also illustrate how new econometric tools can be applied to historical data and sources to dispel age-old views.