For the global economy, it was the best of times, and then it was the worst of times.  Buoyed by very strong growth in emerging markets, the global economy boomed in the mid-2000s.  On average, annualised world GDP growth exceeded 5% for the four years leading up to 2007 – a pace of growth that hadn’t been sustained since the early 1970s.  But it wasn’t to last.  In this post, I illustrate how the failure of Lehman Brothers in September 2008 coincided with the deepest, most synchronised global downturn since World War II.  And I describe how after having seen the fallout of the Lehman collapse, macroeconomic forecasters were nevertheless surprised by the magnitude of the ensuing global recession.

How severe was the Global Financial Crisis?

The Global Financial Crisis (GFC) caused the worst peacetime contraction in world economic activity since the Great Depression.  Using Maddison Historical Statistics, we can estimate annual world GDP growth rates over the entire 20th century (and even earlier), as shown in Chart 1. 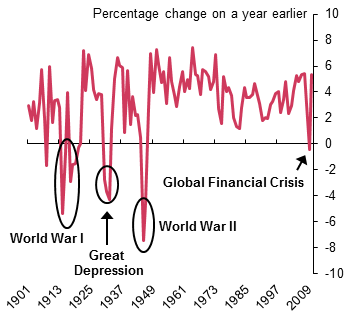 The Great Depression and both World Wars caused steeper falls in global GDP – but the GFC was by far the deepest global downturn that has occurred in the post-war period.  Indeed, so far, 2009 has been the only year since World War II in which world activity contracted relative to the previous year.  Of course, there have been other downturns – the most severe occurred in the mid-1970s, the early 1980s, and the early 1990s.  But annual global growth never fell below 1% in any year of the post-war period – until the GFC.

A similar picture emerges when looking at other indicators of global activity, such as world trade. Chart 2 shows a long time series of annual rates of growth in world trade volumes, taken from Federico and Tena-Junguito (2016).  Again, though less severe than during World War I and the Great Depression (the data don’t cover the World War II period), the fall in global trade volumes during the GFC was by far the deepest contraction that has occurred in the post-war period.  Trade volumes fell by around 12% in 2009 – almost 5 percentage points more than during the next-worst contraction in 1975.

Moreover, the GFC wasn’t just the deepest downturn of the post-war period – it was also the most synchronised.  This can be illustrated using four-quarter GDP growth rates from the OECD database.   Starting in 1961, these data cover 25 major economies, rising to 44 economies by the time of the GFC.  As shown in Chart 3, GDP contracted in 40% to 60% of countries during the global downturns in the 1970s, 1980s and 1990s – whereas the share of countries experiencing negative four-quarter GDP growth spiked up sharply to almost 90% in 2009.  And the share of countries experiencing slowing GDP growth reached an unprecedented 100% in 2008.

Chart 3: Share of economies in recession or experiencing a slowdown

Sources: OECD database and author calculations.  Economies are classed as experiencing slowing GDP growth in a given quarter if four-quarter GDP growth was lower than in the previous quarter.

“How did things get so bad, so fast?”

World activity deteriorated extraordinarily quickly.  Global growth was exceptionally strong in the years running up to the GFC, supported by buoyant growth in emerging market economies (EMEs), especially in China.  Annual average global growth reached its pinnacle of around 5½% in 2007 – but as shown in Chart 4, the pinnacle immediately preceded a precipice.

Lehman Brothers filed for bankruptcy on 15 September 2008.  By this point, in the face of tightening financial conditions, advanced economies (AEs) had already entered recession – annualised quarterly AE GDP growth was around -2½% in 2008Q3.  But there was much worse to come: AE GDP growth plummeted to -8½% in 2009Q1 before recovering.  Annualised world GDP growth dropped from above 6% in 2007Q4 to -5¼% in 2009Q1 – an 11 percentage point turnaround in just over a year.  And it was a truly global recession, with aggregate EME GDP also contracting in 2008Q4 and 2009Q1.

It was always going to be challenging to accurately forecast the deepest peacetime contraction in global activity for 80 years, especially given how rapidly the outlook deteriorated.  Indeed, it could easily be argued that the GFC – or at least the magnitude of its repercussions – was inherently unpredictable.  Nevertheless, it is interesting to examine the evolution of macroeconomic forecasts in the run up to and in the months following the failure of Lehman Brothers, when the GFC entered its most acute phase.

All major macroeconomic forecasters substantially overpredicted  world GDP growth during the GFC.  This can be seen in Chart 5, which plots one year ahead forecast errors for world GDP growth from the IMF and Consensus Economics, and for total OECD GDP growth from the OECD.  In all cases, GDP growth in 2009 was four to five percentage points lower than projected.  And it’s worth emphasising that these forecasters were far from alone in producing – with hindsight – overly optimistic projections during the GFC. 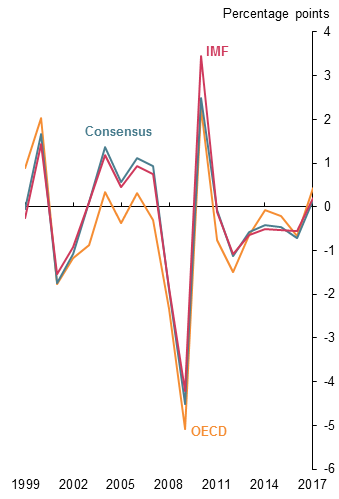 The evolution of IMF forecasts in the months before and after the failure of Lehman Brothers illustrates the dramatic deterioration of the global outlook.  Chart 6 shows successive IMF forecasts of annual average world GDP growth for the year 2009.  It can be seen that in the April 2008 World Economic Outlook (WEO), the IMF was projecting that annual world GDP growth in 2009 would be 3.8% – well above the outturn of around -½%.  Of course, 3.8% growth would have been a material slowdown relative to 2007; the WEO’s opening line was “The global expansion is losing speed in the face of a major financial crisis.”  With hindsight, it’s also interesting to read that “the IMF staff now sees a 25 percent chance that global growth will drop to 3 percent or less in 2008 and 2009 – equivalent to a global recession.”  For world GDP growth in 2008, at least, 3% turned out to be right on the money.  But 2009 would prompt the IMF to reconsider its definition of a global recession. 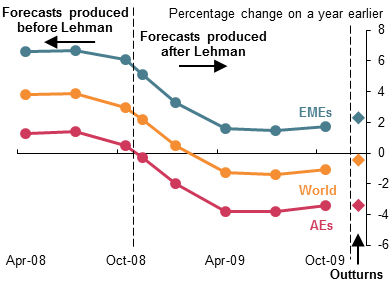 By October 2008, 3% was the IMF’s central projection for world growth in 2009.  Around the publication of the October 2008 WEO, Olivier Blanchard (then the IMF’s chief economist) said “it is not useful to use the word ‘recession’ when the world is growing at 3%.”  In the end, of course, 2009 proved to be a recession in every sense of the word.  The October WEO also included a fan chart around the IMF world GDP growth projections – this showed that the IMF thought world GDP growth in 2009 would be between 1% and 4%, with 90% probability.

The failure of Lehman Brothers prompted a rapid deterioration in the economic outlook, leading the IMF to publish updated forecasts just one month after the October WEO (the October WEO was published after Lehman Brothers filed for bankruptcy, but before the ramifications could be incorporated in the IMF’s projections).  World growth in 2009 was revised down again, to 2.2%.  This was the first IMF forecast in which AE GDP was projected to contract in 2009.

The April 2009 WEO was the first IMF forecast in which global GDP was projected to contract in 2009, and the full magnitude of the crisis was recognised.  The first subsection of the WEO is simply entitled, “How Did Things Get So Bad, So Fast?”  At this point, the IMF had revised down its growth forecasts by 5 percentage points after just one year – an unprecedented revision.

To sum up, the Global Financial Crisis was the deepest, most synchronised global downturn since World War II, and it happened incredibly quickly.  After Lehman Brothers failed, macroeconomic forecasters underestimated the economy-wide impacts of an extraordinary financial shock that resulted in the failure of financial institutions, the evaporation of market liquidity, dramatic falls in assets prices, and a collapse in consumer and business confidence.  It served as a sobering reminder that financial crises have sizeable effects on the real economy.

Comments will only appear once approved by a moderator, and are only published where a full name is supplied. Bank Underground is a blog for Bank of England staff to share views that challenge – or support – prevailing policy orthodoxies. The views expressed here are those of the authors, and are not necessarily those of the Bank of England, or its policy committees