The UK leverage ratio framework and the 35% conversion

To illustrate how the two frameworks interact let us consider a hypothetical Bank A facing no macroprudential buffers or Pillar 2 add-ons. In the leverage ratio framework it will be required to meet the 3% minimum requirement (we assume ‘total assets’ equal exposures for simplicity).

In the risk-weighted space, Bank A will be required to meet an 8.5% Tier 1 (T1) minimum requirement, comprised of a 6% minimum and 2.5% capital conservation buffer.

We can calculate the CRW for Bank A by finding the risk-weight at which the leverage and risk-weighted requirements are equal to each other:

Solving for the risk-weight, we get:

Let’s see what happens to Bank A’s capital requirements if it now faces a 2.5% global systemically important bank (G-SIB) buffer. Under each framework, using the FPC’s conversion factor to translate the risk-weighted requirement into leverage, Bank A will now be required to have:

To reassess how binding the leverage ratio is now, we calculate again the CRW by setting the two requirements equal to each other and solving for the risk-weight that ensures the requirements are equivalent:

The CRW remains unchanged at 35%. As shown in Chart 2: both leverage and risk weighted curves shift as requirements increase such that the leverage ratio remains equally binding over across firms.

So far so good.

Adding Pillar 2 into the mix

Pillar 2 aims to address risks that are not captured or not adequately captured in Pillar 1 (such as credit concentration risk).  Pillar 2 does not feature in the leverage ratio framework however, as the FPC judged that the incorporation of Pillar 2 would add “unnecessary complexity”.

How does this affect capital requirements?  Consider Bank B which unlike Bank A, is subject to a 5% Pillar 2 requirement, reflecting its supervisors’ assessment of the risks not captured within Pillar 1.  Assume neither bank faces a G-SIB buffer for now. Bank B’s risk-weighted requirements will be higher than Bank A’s, but its leverage requirement will be identical.

So should we care at all about the leverage ratio ignoring Pillar 2?

We think it matters for three reasons.

Chart 3 illustrates how Pillar 2 makes the RW steeper as RW requirements increase but does not change the LR line, effectively lowering the CRW.  The CRW for Bank B will be:

This is materially lower than the CRW for Bank A:  the leverage ratio will only bind if the average risk weight is below 22% for Bank B, compared to 35% for Bank A.

Chart 3: CRW falls once we take Pillar 2 into account 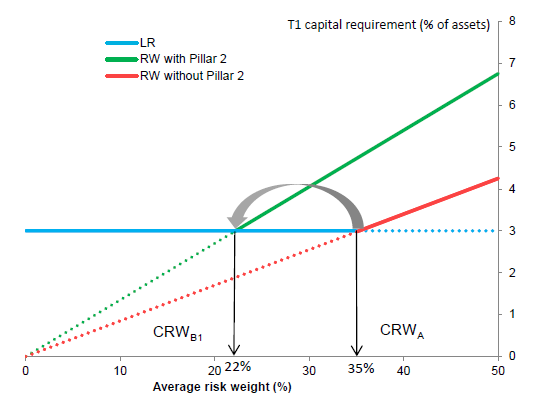 Perverse risk incentives
If policy makers intended for the leverage ratio to act as a capital floor for firms with average risk-weights below 35%, introducing Pillar 2 in effect dilutes this.  In turn, this could make the leverage ratio less effective in guarding against model error and excessive leverage.

Let’s consider again what happens when the G-SIB increases to 2.5%. Earlier we saw that the leverage and risk-weighted requirements move in proportion for Bank A – which has no Pillar 2 – with the CRW staying constant at 35%.

In contrast, Bank B has higher risk-weighted requirements to begin with. Its leverage requirements will increase proportionally more, pushing the CRW from 22% to 24%:

So for Bank B, the CRW increases as and when it faces a G-SIB requirement, whereas a firm with no Pillar 2 – such as Bank A – will see its CRW remain unchanged. The bigger the initial Pillar 2 requirements, the larger the increase in the CRW.  Following the introduction of the G-SIB buffer, firms with larger Pillar 2 add-ons will face a bigger incentive to risk up, as they can move from CRWB1 to CRWB2 in Chart 4, albeit remaining well below an average risk weight of 35%.

We estimate that for the largest UK banks, a shift from CRW B1 to CRW B2 could translate to more than £120bn of additional risk-weighted assets.  While most banks are not constrained by leverage requirements currently, ring-fencing rules could change this as ring-fenced entities will focus on retail (typically low risk-weight) activities.  Therefore regulators will need to keep an eagle eye on the CRW taking into account Pillar 2, if they decide to apply the leverage ratio at the solo-level.

Chart 4: Introducing G-SIB buffers in a world where Pillar 2 shifts the CRW

There are potential mitigants to these risk shifting incentives.  First, the CRW increase above would entail Bank B having more capital to support the rise in RWAs.  Second, regulators can also deploy other prudential tools, such as stress tests and enhanced internal model reviews, where needed.

Supervisors’ periodic reviews of Pillar 2 will change banks’ CRW over time. This could allow firms to subsidise risks and create incentives to increase credit risk.

Assume that Bank B has successfully reduced its exposure to risks captured in Pillar 2, such as credit concentration risk, and therefore Pillar 2 charges fall by 2.5 percentage points. This would reduce risk-weighted requirements but not leverage, increasing the CRW from 24% to 29% (Chart 5). Bank B may now be incentivised as a result to increase its level of credit risk up to CRWB3 as this will not lead to any compensatory increase in capital, effectively substituting one risk for another.  It will be then up to supervisors to monitor these effects as they review Pillar 2.

The FPC explicitly chose not to reflect Pillar 2 in the leverage ratio framework so as to not add “unnecessary complexity”.  Firms however have to meet a Pillar 2 requirement, and we show that once taken into account, the perfect lock-step interaction with risk-weighted requirements no longer holds.

The symmetry could be achieved through a change to the presentation of Pillar 2.  This is currently expressed as a capital add-on. But if regulators translated Pillar 2 into higher RWAs (increasing the denominator of the capital ratio) they would be able to maintain the 35% critical average risk weight over time and across firms.  Although such an approach involves some complexities we think that further work on its pros and cons would be useful to inform regulators’ efforts to complete the post crisis reform agenda.

One thought on “Taking a long hard look in the mirror: should the leverage ratio reflect Pillar 2?”